Mobile abattoir technology is a unique concept that has been developed over the years in many countries due to various needs.

Initially the need to service small farm holdings to safely slaughter their farm animals with properly qualified meat inspection. Also, simultaneous development of different technologies developed in the last decade in Australia for kangaroo hunting and in South Africa for game harvesting but lately also for slaughtering of cattle in remote rural areas and to facilitate the recovery of meat through the commodity-based trading principle in Foot and Mouth Disease infected control zones.

The slaughter unit is powered by a solar system that supplies a winch, lights and compressors. The compressor unit, in turn, supplies air pressure to de-hiders and pneumatic saws

Currently, only cattle slaughtering is done with de-hiders to ensure quality skin for further leather products.

This will now also become available to supply high-quality game skins for the market.

The unit will also have a system where offal can be cleaned to ensure that valuable protein is not lost.

The unit has a primary purpose of ensuring maximum retrieval of products traditionally hunted with limited recovery of products due to the rudimentary practices associated with it.

The development now allows for a highly skilled and safe process to maximise the return on investment.

The game industry has entered a new era when the Meat Safety Act (Act 40 of 2000) listed game animals as “meat” under the act and thus a product that could contribute to food security in the country.

Before 2000 the game meat entering the market was seen as recreational and not having an impact on meat safety to the consumer. The hunt was all about the thrill and not the meat.

Together with this, however, came the responsibility that the product had to fulfil the requirements of the law in that it needed to be inspected for safety after being slaughtered in an approved facility. The above created a severe challenge for the game industry due to the fact that the Act stipulated that a dead animal could not be brought into the abattoir for slaughter.

Due to this -game meat that entered the market in the last 15 years was illegal and could endanger the lives of consumers. A perception was also created that the game meat is of inferior quality compared to red meat and poultry.

It is currently estimated that between 50 and 150 000 carcasses per annum are supplied to the market and this excludes the biltong and recreational hunter.

The cost of the product in the market however suggested otherwise and the result is that the product enters the market with the same if not more of a risk in the transmission of zoonotic diseases and other economic diseases to the country and the consumer (e.g. Rift valley fever, Foot-and-mouth disease etc. etc).

Most of the diseases encountered over the years in farm animals have manifested itself in game where game is “farmed” with great danger to the consumer. It is also true that game farms are becoming smaller and smaller and the possible interaction with domesticated animals greater and greater.

The biggest challenge in meat production was always to bring the live animal to an approved facility for slaughter and stun the animal prior to effective bleeding.

With the harvesting of game for the export market where the carcass is partially dressed in the veld, it was proven that a method of killing the animal in the veld can still produce a highly safe and clean product even to satisfy the EU export market. The requirement that a live animal has to enter the abattoir alive has been proven null and void. The same fallacy that trophy meat was considered of inferior quality and thus unacceptable for supply to the market was proven, with scientific studies, to be inaccurate.

The dilemma, however, was that we still had to transport the carcass to an approved facility to complete the slaughter and inspect the final carcass.

During the process of harvesting for the export market, the following had to be done;

1) Register the farm to evaluate the residue and disease control risk as well as establishing an effective traceable system.
2) Register the harvesting team to ensure competent slaughter personnel that are healthy and have a partially acceptable slaughter procedure in the veld as well as partial meat inspection.
3) Have an approved slaughter facility (abattoir) to complete the slaughter and fulfil the requirements of the law e.g. approved facility and final meat inspection.
4) Have an approved deboning/processing facility to finish the product to customer requirements.
5) Should the above be adopted for quality local meat supply it seems that 1,2, and 4 will not be a problem but the pothole always was no. 3, the facility with meat inspection.

This problem is now solved with the development of a versatile mobile abattoir that can be taken to the animal where it is harvested or hunted in the veld especially under South African conditions.

This facility can now fulfil the requirements of the law with registration. The full process of slaughter can be done in a controlled environment within the safety norms required by law.

As most of the preliminary inspection work is done by meat examiners, a meat examiner can be trained to accompany the mobile abattoir to fulfil this requirement.

Final inspection at the processing plant will complete the inspection to ensure that a safe product can be delivered to the consumer.

This development has resulted that game meat will now become available to the consumer throughout the year at a competitive cost to ensure the dire need for food security not only in RSA but also worldwide.

The mobile abattoir was developed to be a lightweight structure that can be transported into the South African bush by a hunting vehicle/chiller truck, deployed in an acceptable time frame to operate and again dismantled to be transported to the next site.

The mobile abattoir concept was accepted and approved by the Department of Agriculture, Forestry and Fisheries as a fully licensed abattoir under the Meat Safety Act ( Act 40 of 2000)

The mobile abattoir has various unique features such as;

Click here to view the full gallery or click below to view the mobile abattoir in action! 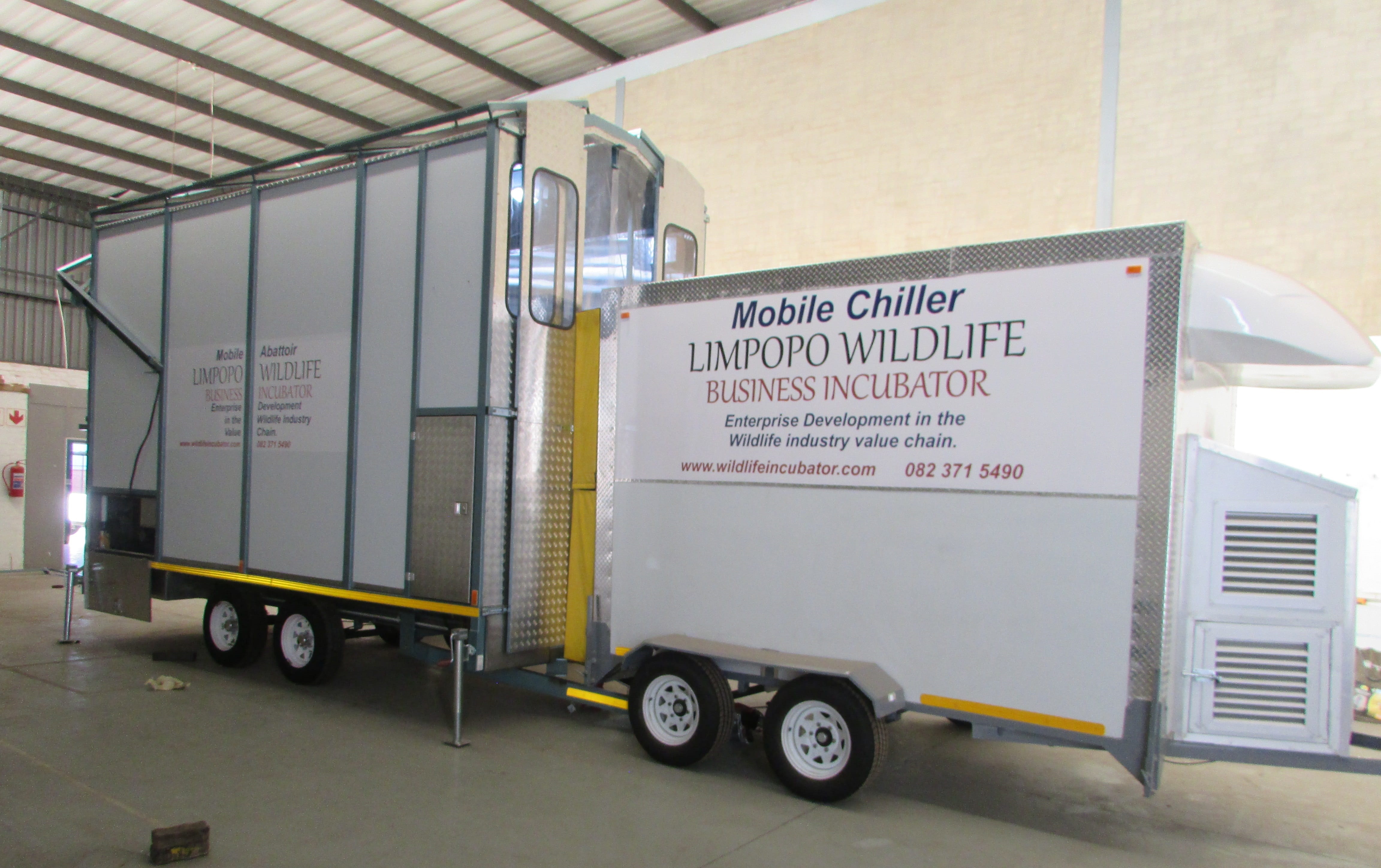 “Mobile abattoirs” is a privately-owned company established in January 2015 after the need for a safer way to harvest game meat for the local market was identified.

The company is now trading as “Mobile Slaughter Technologies” due to the versatility and diversification to cattle, sheep and goat abattoirs as well as the development of pig and poultry containerized abattoirs.

The Meat legislation required that animals must be brought alive to an abattoir to be stunned for humane reasons and to ensure good bleeding out of the carcass. This is required to ensure a proper shelf life for the meat and to reduce the possibility of bacterial growth due to the presence of high levels of blood in the muscle.

This fact, however, was proven to be not that critical when export harvesting of game was done by shooting and partial slaughtering of carcasses on rudimentary frames in the veld.

The need for a more efficient and cost-effective system for the local market was always lacking.

A further development was the suitability of the mobile abattoir to slaughter cattle in Foot-and- mouth infected and protected zones. The unit lends itself perfectly to slaughter at the cattle holding areas, leaving infective material behind and after maturation are then able to transport the meat to open (non-infected areas).

The mobile unit proved to be a solution through commodity-based trading as a means of accessing meat markets in countries with endemic Foot-and-Mouth Disease and the close interaction between domestic livestock and game.

Dr. Tertius Bergh, a seasoned veterinarian working in the field of meat safety for many years with a wide expertise in meat regulations, training of inspectors and abattoir approvals had a vision of closing the gap that existed in the game industry by rather bringing the abattoir to the animals if game animals could not be brought to the abattoir.

Fill out the contact form below and we will get back to you as soon as possible.